A Gift of Love

Lessons Learned From My Work and Friendship with Mother Teresa

Stories from a life of caregiving for others that will help those who have the responsibility and the privilege of caring for a loved one at the end of his or her life.

After experiencing a comfortable childhood as an heir to the Cointreau liquor fortune, and having had a successful career in show business, Tony Cointreau felt that he needed something more meaningful in his life. This led him to spend twelve years as a dedicated volunteer in Mother Teresa’s hospices in New York and Calcutta, helping more than one hundred people while they went through the process of dying.

Every family eventually has to deal with caregiving and the end of life, and Tony's friends kept pleading with him to write his experiences so that when they had to face it, perhaps for the first time, they would have a better idea of the simple things they could do to help their own loved ones during those last months, weeks, days, or hours.

This book is Tony's answer to those requests. His overall approach to caregiving for the living as well as for the dying shines through in each chapter, both in practical matters and in reverence for the privilege of sharing in life's momentous transitions.

Ethel Merman, Mother Teresa... and Me

Ethel Merman and Mother Teresa had a lot in common. At first glance, that might seem highly unlikely, but in my years with them both, I discovered that though the differences were huge, surprisingly, there were also great similarities. Read more>> 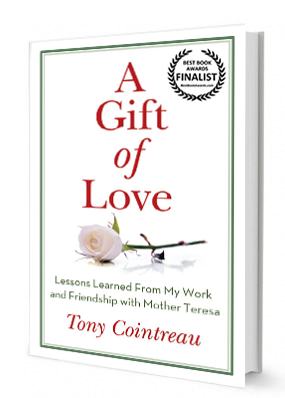 Praise for Ethel Merman, Mother Teresa... and Me

"I was so interested in your life with Ethel Merman…she was a gifted and fascinating woman. And of course Mother Teresa is smiling down. I don't think she would ever be anything but enthusiastic about your life and its far-ranging activity.

Your book is a wonderful story that nobody else can tell. I even think your family background is fun! You are a Cointreau, but then you also had the important entertainer career—I don't think they make many more like you."
—HELEN GURLEY BROWN, Author and iconic editor-in-chief of Cosmopolitan magazine

Dear Tony,
I am glad to know that you have experienced joy in sharing our works of love for the poor in our home for AIDS patients. Thank you for your generous gift of love. Please pray for me as I do for you.
God bless you,
—MOTHER TERESA, Missionaries of Charity