Ethel Merman, Mother Teresa... and Me

Read reviews of Ethel Merman, Mother Teresa... and Me

Ethel Merman and Mother Teresa had a lot in common. At first glance, that might seem highly unlikely, but in my years with them both, I discovered that though the differences were huge, surprisingly, there were also great similarities.

Often I would be in a restaurant with Ethel Merman, "the Queen of Broadway," who was known for her loud voice and brassy persona onstage, and after dinner I would ask her, “Would you please, very quietly, so no one else can hear, sing your favorite song for me?”

And—always—she would then begin to sing, “Our Father, Who art in heaven, hallowed be Thy name...”

Not many people knew about it, but Ethel also served as a volunteer at Roosevelt Hospital for many years, beginning when her mother was hospitalized after a devastating stroke, and continuing until Ethel herself was too ill to work any more. She was wonderful with sick people. She would sit at their bedsides and hold their hands and comfort them, something you might have expected from Mother Teresa.

One morning as I sat next to Mother Teresa, who was considered a living saint, on her balcony in Calcutta, she was particularly tired after a long meeting with some of her Sisters. I leaned close to hear her weakening voice over the sounds of traffic from the main road below, expecting to hear words of wisdom.

“How much does your hotel cost?” she whispered. When I told her, she said, “I don’t mean per week, I mean per day.”

I knew her sense of humor well, and was not surprised at her laughter—something you might have expected from Ethel Merman.

Ethel Merman and Mother Teresa, along with a remarkable woman named Lee Lehman (the wife of Robert Lehman, the chairman of Lehman Brothers), were like mothers to me, and the three of them helped to heal the parts of me that had been damaged as a child. Their humor, their support, and their compassion finally gave me the unconditional love I had been seeking my whole life. 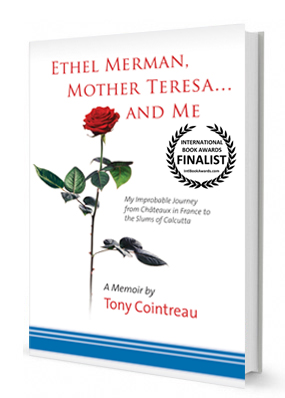 "I was so interested in your life with Ethel Merman…she was a gifted and fascinating woman. And of course Mother Teresa is smiling down. I don't think she would ever be anything but enthusiastic about your life and its far-ranging activity.

Your book is a wonderful story that nobody else can tell. I even think your family background is fun! You are a Cointreau, but then you also had the important entertainer career—I don't think they make many more like you."
—HELEN GURLEY BROWN, Author and iconic editor-in-chief of Cosmopolitan magazine

Tony Cointreau's friendship with my mother was one of her life's true blessings. Naturally comfortable in the brightest light of her stardom and the softest light of her vulnerable heart, Tony shared an everyday intimacy with Ethel like a second son...like my brother.
—BOB LEVITT, Ethel Merman's son

Dear Tony,
I am glad to know that you have experienced joy in sharing our works of love for the poor in our home for AIDS patients. Thank you for your generous gift of love. Please pray for me as I do for you.
God bless you,
—MOTHER TERESA, Missionaries of Charity